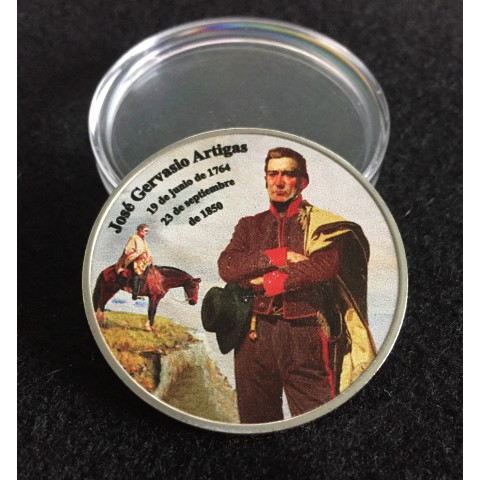 Artigas was born in Montevideo on June 19, 1764. His grandparents were from Zaragoza, Buenos Aires and Tenerife (Canary Islands). His grandparents fought in the War of the Spanish Succession and moved to the Americas to escape from poverty, settling in Buenos Aires in 1716. Artigas was the son of Martín José Artigas and Francisca Antonia Arnal, who came from a wealthy family. His parents enrolled him in the Colegio de San Bernardino, to pursue religious studies, but Artigas refused to submit to the school's strict discipline. Before he left the school, he developed a strong friendship with Fernando Otorgues, who would work with him in later years. At the age of 12, he moved to the countryside and worked on his family's farms. His contact with the customs and perspectives of gauchos and Indians made a great impression on him.[Once he had come of age, he distanced himself from his parents and became involved in cattle smuggling. This made him a wanted man among the owners of haciendas and with the government in Montevideo. A reward was put out for his death.

Things changed with the opening of the Anglo-Spanish War, and the threat of a British attack upon the viceroyalty. The viceroy Antonio de Olaguer y Feliú negotiated a pardon with his family, on the condition that he joined the Corps of Blandengues with a hundred men, to form a battalion. Thus, he began his military career in 1797, at age 33, with the rank of lieutenant. The attack finally came in 1806, when William Beresford invaded Buenos Aires, in the first British invasions of the Río de la Plata. Although Artigas's unit was tasked with patrolling the frontier with Brazil, he requested to take part in the military expedition that Santiago de Liniers launched from Montevideo to drive the British out of Buenos Aires. His request was granted, and the British were defeated. After the liberation of Buenos Aires, he was tasked with returning to Montevideo and informing the governor Pascual Ruiz Huidobro of the result of the battle. A second British attack aimed to capture Montevideo, which was captured in the Battle of Montevideo. Artigas was taken prisoner, but he managed to escape and returned to the countryside. He organized groups of gauchos and began a guerrilla war against the invaders. The British tried to capture Buenos Aires a second time, but were defeated by the local armies, and returned Montevideo to Spanish control as part of the terms of capitulation. Artigas was promoted to captain in 1809.